Do You Speak English? 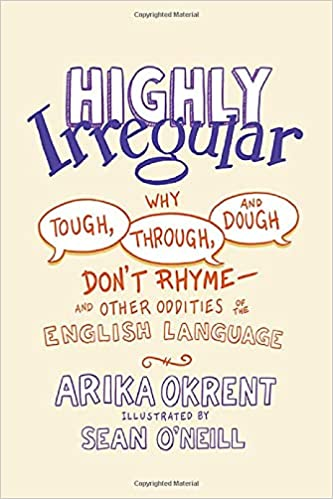 If you are like me, though I don’t wish such a burden on anyone (LOL), you’ll enjoy reading Highly Irregular: Why Though, Through, Dough  Don’t Rhyme --- and Other Oddities of the English Language, by Arika Okrent, a linguist freelance journalist and brain lab researcher with a Ph.D in Psycholinguistics.

After consuming her insights on the contradictions of our language, one can only wonder why we should expect the language to ever really be stable. In fact, after seeing how word usage has consistently changed over the centuries and millennia, we can more easily understand our current state of language. English is impacted by foreign languages, especially Spanish, and culture, such as Ebonics, and technology (texting goes unpunctuated, filled with shortened words, misspellings, emojis, etc.).

We’d like to think there are fixed rules and established norms to our beloved English language, but what we have is temporary. Look at a book from 1850, then 1940, and 2020. They vary greatly. Look back further, to 1600, 1066, 930 --- they are very different to the point those writings would be unrecognizable today.

Okrent’s book sheds light on areas that we should all be curious about. She provides possible answers, but not all are admittedly definitive. Still, she helps us close the gap and restore reasoning as to how today’s English developed over the years.

Why do we drive on a parkway and park on a driveway?
Why are there two ways to say the letter G? (Hard g of give; soft g of ginger)?

Why do we have silent consonants?  (gnat, knot, comb, wrist, debt, receipt, salmon, and doubt)?

Why do some words have a lot of extra letters? (asthma, phlegm, diarrhea)?

Why do noses run and feet smell?

The English language has also changed the more it was written and printed, instead of just being spoken.

“Over the centuries,” writes the author “as English became increasingly written, taught, codified, standardized, and used by official institutions, not only did the language change, but our idea of what the language is changed.”

Our language is a result of so many influences. Every day, habits are reinforced by social pressure, institutional customs, new generations, foreigners, and constant repetition.

In 1476, William Caxton brought the printing press to England. By virtue of printing and the mass production of books and documents, standards developed and the process of making things uniform were under way.

The English language, with various dialects, strange pronunciations, weird spellings, silent letters, inconsistencies, and contradictions is ever changing. Language is always in transition, and even when a standard seems to be established, it is being bastardized from all sides, contributing to what will be tomorrow’s standard.

Here are some interesting excerpts from her entertaining book:

“Language will change, and so will our attitudes about it. The whole idea of “fully accepted, unquestionably correct, standard English” is very new in the life of the language and has only had an affect on guiding people’s language habits for a short time, a couple hundred years. When language changes, it’s never the whole system changing at once. It happens one piece at a time, and the pieces don’t coordinate or even communicate with each other while they do this. Contradictions won’t be noticed until they’re already baked in. All languages have them. English, because of its history, has a lot of them. But that doesn’t stop the system from working. It doesn’t stop people from learning to use it, from making sense of what doesn’t seem to make sense. We don’t need to make order out of the chaos ; we just need to put it to use.”

Demands For Books In English

“After the printing press started churning out books, English began to flourish as a written language. It had been dormant for a long time, shoved aside by French and Latin in domains where people wrote things down. So, while it was robust and healthy as a spoken language, there was no trusted authority or tradition to follow when writing it. That wasn’t such a problem at first, but soon people felt the need for some direction, some standardizing influence. In the sixteenth century English was felt to be deficient compared to Lain and Greek, which learned people still studied in school. However, most of the growing reading public wanted books in English.”

“All languages have rules, even unwritten, uncodified vernaculars. Linguistic rules are patterns, conventions for making utterances that conform to certain general (though much debated) principles of human language ability.”

“Every act of language use involves a mix of enforcing old habits, applying rules to new situations, and economizing effort. The proportion of the mix is subject to varying priorities and is always changing. It may not make for a very orderly product, but it does the job we need it to do.”

“Even when words overlap considerably, they tend to carve out little areas of meaning for themselves. Or rather, the words themselves don’t do this; the people who use them do. Meaning is not something contained in a word but a habit of usage that emerges over time by consensus.”

“So how does that habit or consensus come to be?  Slowly, over time, from generation to generation; and even after things have changed, very old habits can still show their influence in subtle ways.”

“Language changes, and change introduces lumps and bumps and flaws in the system, but a lot of what makes English weird has to do with what didn’t change, what got held over from the earliest layers of the language.”

“English has changed so much in the last thousand years that almost nothing in Old English looks familiar if you haven’t studied it. Being a speaker of modern English barely helps you at all.”

Catch Up With These Posts

Will You Play Author Squid Games?

Will You Take A Writer’s Oath?

Posted by BookMarketingBuzzBlog at 8:56 PM