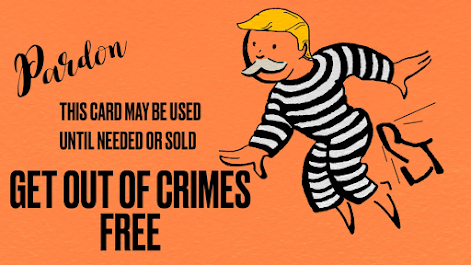 “A pardon is a government decision to allow a person to be relieved of some or all of the legal consequences resulting from a criminal conviction. A pardon may be granted before or after conviction for the crime, depending on the laws of the jurisdiction.”  -- Wikipedia

Outgoing President Donald Trump is rumored to be scheming to pardon family members, close associates, friends, and possibly himself for any and all crimes that they have not even been charged with, let alone convicted. Constitutional challenges and moral outrage aside, this topic made me think about potential pardons for the book industry. If I had the power to pardon people as it relates to the book world, who or what would I forgive?

Sorry, but no one deserves to be absolved of their wrongdoing in the book world. I would not give pardons to any of the following scoundrels and losers:

They own the book industry. They publish books. They self-publish. They sell new and used books. Everyone is overly dependent on them. What happens when they assert their power and jack up prices, limit what gets sold, put stores out of business, gut jobs, and sell all of their data about readers?

This publisher of great writers and many bestsellers, sold itself to the highest bidder. Nothing wrong there, except it meant they would join forces with the already biggest publisher, Penguin Random House. Monopolistic companies are not good for any industry. Competition suffers, jobs get cut, book prices go up, and writers have less bargaining power.

They published former President Barack Obama’s best-selling memoir, A Promised Land, and splattered a cover price of $45 on the hardcover. In a sign of greed gone bad, the publisher is ripping off consumers, libraries, and schools. The celebrity memoir is not dead, but the nation’s largest publisher is going to kill the marketplace with such prices during a pandemic-wrecked economy.

This well-respected institution is the number one book reviewing source, but would it kill them to allow for self-published books, if worthy, to be reviewed? Holding such a baseless prejudice against some award-winning, best-selling books is ridiculous.

They have been mismanaged for over a decade. Slow to pick up on the e-book craze, they keep playing catch up. They go through a new CEO seemingly every other year and lack vision, leadership, and initiative to make their stores and online business a dominant force.

I support educators who are driven by passion and a desire to produce better readers and to extinguish illiteracy, However, there are too many bad apples out there. Many take the job because they get summers off and long vacation breaks. They don’t feel invested in raising a smarter generation and too willingly fall victim to a bureaucracy that fails to serve the community. This is no more evident than during corona. Too many teachers fail to show up to school, whether in person or via zoom. As a parent of two school-age children, I am thoroughly disgusted by what I see going on in the public schools.

Literary agents fear becoming irrelevant. Self-publishing and small presses provide options for authors, but they still serve as gatekeepers for the big publishers, and unfortunately they are driven too often by metrics that have little to do with a book’s merit. If you don’t have 20.000 Twitter connections, many will pass over your manuscript. If you don’t indicate you will purchase copies or pay for a publicist, some agents will toss your submission in the garbage. What happened to representing a really good or important book — and not pouring through one’s social media feed first?

You know who you are. Not every story deserves an audience but you think everyone should drop everything to read your book even when it is dull, poorly edited, and simply not important. You let your ego get in the way of your judgment. Don’t publish garbage and demand we see it as gold.

A bailout is needed for the literary arts. Everyone is getting free money but the starving artists. Cough up some dough!

Some do a really good job and some just do a really good job of taking in donations. Literacy should be a basic right, same as food, shelter, clothing, and access to medical care. To be literate means self-sufficiency, positioning one to go from being a taker to a maker, from dependence to independence. So why, after decades and tens of billions in funding, do we still have tens of millions of illiterates in America?

Okay, so I sound like a moody bitch wearing a Grinch face, but it gets frustrating to see the institutions that we would like or trust to fail us so significantly. This is no time to pardon people in the White House nor in the world of books. It is a time to call these people and institutions out — and to demand a change for the better. If I hurt someone’s feelings, that is good. Shared pain is needed for things to get better.

Posted by BookMarketingBuzzBlog at 8:27 AM