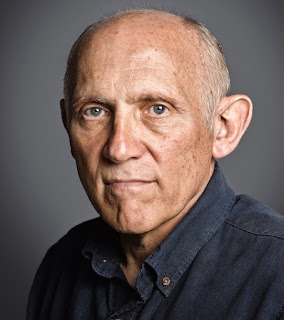 1)    What motivated you to write your books, to force you from taking an idea or experience and turning it into a series?

As a young man, I had enjoyed writing and had gotten some prizes for doing so. However, after being seduced by the acting bug -- the dark side of the force, I gave up those ambitions. Then through a series of fortuitous events, I met Michael Scott, a prolific fantasy writer and my co-writer on the Merchant Prince series. He slyly suggested we do a series of adventure novels involving the historical Shakespeare and Dr. John Dee and have them encounter the fictional characters from Shakespeare’s plays. It was a siren call that I couldn’t get out of my head. Though it spoke to me often, it took years to set down the first word and then years more to complete the Twelfth Night adventure which is Illyria.

Why Shakespeare you may ask? The old adage says, “Write what you know about.” The simple fact is I have studied the Bard all my life and as an actor have performed a third of his works and have directed three of them including two productions of Twelfth Night. My interest has led me down many rabbit holes about the man, his works, his period, and his contemporaries. Illyria is my earnest attempt to paint the Elizabethan world as it existed and entertain the reader with the period’s curiosities and mix them with the comic qualities of Twelfth Night’s characters. Give them what theater folk would call “back stories.”

They are for readers that are unfamiliar with Tudor History, who may not be aware of the huge religious and philosophical wars between Catholicism and Protestantism that existed at that time. Aristocrats and commoners alike were killed by rival factions for their steadfast beliefs and their devotion to their chosen Church. Financial and familial sacrifices were common. It was a huge factor in English foreign policy and affected nearly every aspect of existence. It was a chilling time and was a very different life than the “Merrie Olde England” that many suppose that period enjoyed. But the novels are not just history lessons, they will tickle the imaginations of those lovers of Shakespeare’s plays, especially Twelfth Night by providing a prequel to one of Shakespeare’s most beloved titles. The books are meant to both inform and amuse in a way that I believe are accessible to both Shakespearean lovers as well as those who for whatever reason have been put off by bad teachers of his plays. Besides, they are ripping good tales.

3)    What takeaways might the reader will be left with after reading them?

As I said before, the major takeaway would be insights into a time that was tragically not so different from our own. After all, like the end of the 16th century, ours is one of wars, aggression, creativity, and innovation. But, perhaps my books might add a revelation or two to the thousands of books that explore how the young man from Stratford became English literature’s most influential writer. I can and do make the case that Dr. Dee may have been a huge influence on WS’s writing and knowledge of the ancients.

4)    How did you decide on the books’ titles and cover designs?

Illyria was almost always my choice for the novel. Although at first, I had chosen the title, The Toadeater. Don’t ask me why. I just liked the word and what it meant. But, Illyria is so much more insightful and immediately should conjure up Twelfth Night for those who know the play. The subtitles were chosen by conference calls with my publishers and editor. The books’ designs were all the masterful ideas of Gene Rowley who is the co-founder of Jumpmaster Press. And I am continually appreciative of his artistic choosing of the cover designs.

5)    What advice or words of wisdom do you have for your fellow writers?

None. I would not be egotistical enough to presume to give advice. All I know is that writing is re-writing. And nothing sparks my imagination more than reading everything I can get my hands on.

6)    What trends in the book world do you see – and where do you think the book publishing industry is heading?

That question is far above my pay-scale. I dare not speak my ignorance.

7)    What challenges did you overcome to write these books?

First and foremost was my lackadaisical use of time. Picture me like one of those aficionados who build a car or a plane in their garage from scratch. There is no hurry and you think it a hobby while your main career and family monopolizes your attention. It wasn’t until I had a publisher and deadlines to meet that I made it a full-time job when I wasn’t acting. Also, I will admit that reading Hillary Mantel’s Wolfhall trilogy caused me to stop working on my project for years. Her magnificent storytelling and language was daunting and I told myself I could never come close to filling her shoes. How does one compete with someone who deservedly won the Booker Prize two years in a row? But my wife, Kitty, repeatedly told me, “You have your own way with words and you must tell your own story.” Wise words from a wise woman. Though dilatory, I finally completed the novel. Then after realizing how many words I had submitted, my new publishers suggested the need for three books instead of one. Consequently, I had to work on two cliff-hangers for the first two books, which greatly affected the through-line of my two main characters in all three books. Lastly, being a perfectionist – a most irksome infirmity – I have had to force myself to stop polishing and be content with what I have written. None of these were easy.

8)    How would you describe your writing style?

Comical, theatrical, sometimes arcane to match the period, lively, historically and, at times, linguistically accurate, while being as close to my own voice as possible.

9)    If people can buy or read one book this week or month, why should it be one of yours?

To learn something new about a period of time that is fascinating and misunderstood. To laugh. To say to someone, “I just read something that I never knew.” To help out an actor who is hoping to become known as a novelist.

About The Author: A veteran of stage and screen, Armin is widely known for his portrayal of Quark on Star Trek: Deep Space Nine and Principal Snyder on Buffy the Vampire Slayer. Other credits include notable appearances on TV shows from Hill Street Blues and The West Wing to CSI and dozens of others. His voice has been heard in many animated shows and popular game series such as Ratchet & Clank and BioShock. Armin is a renown stage actor, having performed on Broadway and stages across the country. He is also a Shakespeare scholar and teacher, theatre arts lecturer, and former Associate Artistic Director of the Antaeus Theatre Company in Los Angeles. With his wife, Kitty Swink, Armin is an active fundraiser for the Pancreatic Center Action Network (PanCAn). For more information, please consult: www.arminshimerman.com

Why Authors Need The Momentum Of A Yes

Getting Others To Buy -- Or Help You Sell -- Books

Will You Sell More Than 200 Copies Of Your Book?

Posted by BookMarketingBuzzBlog at 7:08 AM