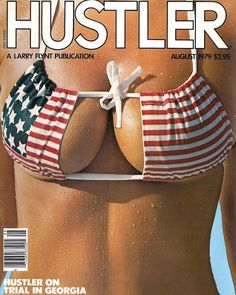 In the era of #MeToo and Cancel Culture, it may seem strange to shed a tear for the passing of a man who once ruled over a smut empire valued at $500 million, but with the passing of Hustler magazine publisher Larry Flynt, it is quite appropriate to applaud his advocacy of free speech.

Flynt, who was shot by a white supremacist in 1978 because Flynt’s magazine published interracial sexual images, was left paralyzed at age 36. But that didn’t stop him from being an outspoken defendant of free speech, first over porn and then over parody. He won a landmark United States Supreme Court case in the 1980s against televangelist Jerry Falwell. Hustler was not the high-end nude art magazine embodied by celebrity-driven Playboy or the alternative, Penthouse. But it did have its legion of fans — and enemies, including feminist advocate Gloria Steinem, who labeled him “a violent, sadistic pornographer.” Hustler once made headlines for publishing nude photos of former first lady Jackie O, who was sunbathing and had not consented to such pictures. Flynt, who rose from poverty growing up in Kentucky, was at one time one of the most visible pornographers and free speech heroes. Free speech, as we need to be reminded now, more than ever, is not always pretty or without consequences. But we cannot silence those we disagree with or simply don’t like. Free speech is not a commodity or privilege; it is a right. One can oppose the speech of others, not by silencing them, but by answering them. Show facts. Be persuasive. Set higher standards. Appeal to human decency. You don’t win an argument simply by not having one. You prove your point by stacking it against its horrible opposite. This is America. We don’t shun nudity, art, and unpopular views. We don’t outlaw political opinions from being expressed. We don’t use financial muscle, technological advantage, political favor, or military might to  silence people, not even to clam up the deplorables on the right or the PC bullies on the left. I implore tolerance. Let people spew — and let’s answer the call to respond with facts and passion. Let’s educate people to better understand how to make sense of what they are exposed to. Inform, educate, and enlighten — and don’t fear the airing of words, images, ideas, and views that will offend, anger, despair, and challenge people. The truth will win out, but only with open debate and free expression. Flynt may not be everyone’s best friend, and indeed, some truly saw him as an evil man who exploited women. But on free speech, the man is a legend.

Authors Have Many Reasons To Give Up – But They Shouldn’t

Why Authors Don’t Get What They Want

Writers Need To Be Nurtured, From Teens to Octogenarians

How Can Authors Market More Efficiently?

Authors Need to Know Why They Write Books

Brian Feinblum, the founder of BookMarketingBuzzBlog, can be reached at  brianfeinblum@gmail.com.  You can – and should -- follow him on Twitter @theprexpert. This is copyrighted by BookMarketingBuzzBlog ©2021. Born and raised in Brooklyn, he now resides in Westchester with his wife, two kids, and Ferris, a black lab rescue dog. His writings are often featured in The Writer and IBPA’s The Independent.  This was named one of the best book marketing blogs by BookBaby  http://blog.bookbaby.com/2013/09/the-best-book-marketing-blogs and recognized by Feedspot in 2018 as one of the top book marketing blogs. Also named by WinningWriters.com as a "best resource.” He recently hosted a panel on book publicity for Book Expo America. For more information, please consult: linkedin.com/in/brianfeinblum.

Posted by BookMarketingBuzzBlog at 11:20 AM