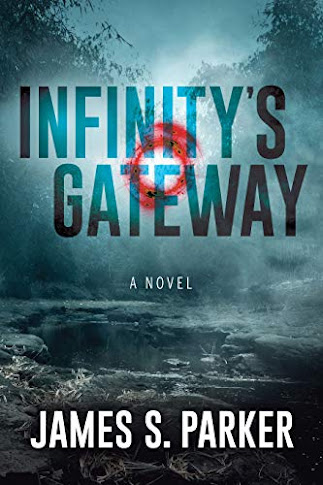 1. What motivated you to write your book, to force you from taking an idea or experience and turning it into a book?  I've always had a strong interest in the fact that so many people actually disappear every year.  There are some areas where this kind of thing occurs in abnormally high numbers.  That interest, combined with an incident that happened to me in my senior year of high school, were the impetus for this novel, Infinity's Gateway.

My family and I lived in northern Kentucky, across the river from Cincinnati.  Both my parents worked.  My mom was a nurse and at the time had gone to work at a nursing home in Covington.  They told her when they hired her that sometimes, both patients and staff, would report hearing and even seeing strange things.  They said that they were not trying to tell her that the place was haunted, but wanted her to be aware of this. Mom came home, told the family about what they'd said and we laughed it off.

Many weeks later, on a Friday night, mom was working the night shift, 11:00 p.m. to 7:00 a.m.  Not long into her shift she called home and asked me what I was doing.  I told her that a friend and I were watching Johnny Carson. She said that they were hearing footsteps coming from the third floor, a floor that was not in use. The footsteps would go from one end of the floor to the other, then come down an enclosed stairwell. She said that they were just waiting for the door to open.

Clearly they had someone in there messing with them and I told her to call the Covington police.  She told me that they had, that the police had already been there twice, but couldn't find anything wrong.  So my friend and I agreed to go over and spend the night with them.

We were hanging out at the second floor nurse’s station, and had not been there long when we too heard the footsteps.  If it was a mouse, it was wearing boots. So once again the police were called. This time they brought a K-9 unit.  It was one of the largest German Shepherds I'd ever seen. They waited around for quite a while and of course, nothing happened.  Just as they were getting ready to leave the footsteps returned.

They quickly moved down the hall to the door leading to the third floor stairwell.  One officer placed his hand on the doorknob and held his gun in the other. His partner held the dog by the collar, prepared to release it. We were all standing roughly fifteen feet away from them.  Just as the footsteps reached  the bottom of the stairs, the one cop flung open the door and the other released the dog.

There was absolutely nothing standing there.

The K-9 unit put its tail between its legs and backed into the wall whining. They never did get that dog up those stairs! They searched the place again and once again didn't find anything. That's the night I learned that cops carry business cards because they gave them to us.  They said if we heard anything else to call and ask for them.  The footsteps reoccurred several more times, but there was no point in calling them.

That night taught me several things. It opened my mind and allowed me to realize that as smart as we may think we are, we do not know all that goes on around us. I experienced a level of fear that I'd never felt before. It was an incident that to this day gives me chills.  This incident has colored a great deal of my writing.

2. What is it about and who is it for?  Every year, all across the planet, people simply vanish, completely disappear and are never seen again. Some areas of the world are well known for this phenomenon.  Infinity's Gateway opens with a very famous incident that took place right after the end of World War II with the United States Navy. The story then jumps to the present day with an unexplainable event that occurs off the coast of Florida, an event that cannot be ignored by the military.

The Navy ship Eclipse and its crew are sent to investigate, but after several days come up empty.  Two days before returning to port, the event reoccurs, and the Eclipse is caught up in something it cannot escape.  The Eclipse and its crew suddenly find themselves completely isolated, all communications lost, surrounded by a terribly hostile environment where each day is a struggle to survive.  Infinity's Gateway is an intense, action packed story of survival, self-reliance, and discovery.

This book is for readers who love fast paced thrillers filled with action and suspense.  It is especially enticing to those readers who enjoy science fiction, as they will appreciate the many unique plot twists in the novel.  The reviews on this book, from both men and women, have been very positive.

3. What do you hope the reader will be left with after reading it?  For all three of the novels that I have written, I simply try to write the kind of stories that I enjoy.  Infinity's Gateway is the first book in a trilogy. I want to the reader to be left wanting more. I want to leave the reader so immersed in the story that they will be anxious to get their hands on the second book.

And just as important, do not listen to the naysayers!  Ignore the dream stealers that tell you you'll never get it done. And the biggest naysayer of them all, and the hardest one not to pay attention to, is that little voice in your head.  You can get it written and there are all kinds of people who can help you along the way.

5. What trends in the book world do you see -- and where do you think the book publishing industry is heading?  The recent pandemic, according to some publishers I spoke with, brought about a 9% to 11% increase in book sales.  The format for books has changed with the times, which has served to broaden the market.  Books now come in the traditional hard and soft cover, as well as audio and eBooks. These various formats have made books more accessible.

My business, as well as my writing, has given me contacts across the country and in the United Kingdom. It is encouraging to me to see book clubs jumping up in neighborhoods everywhere, as well as the independent book stores hanging in there against the corporate giants such as Amazon and Barnes & Noble.

In regards to the publishing industry, the number of publishers seems to be growing, many offering their own unique twist on publishing.  This is helping more and more writers to get their books out there, whereas before, if one of the larger publishers didn't pick your book up, self-publishing was about the only choice available.  This isn't the case anymore.

6. What challenges did you overcome to write this book?  This story has been in my head for a long time. Twice before I'd tried to write it, but for some reason, could not get it down on paper. Finally, with some good advice from my wife and my editor, the clouds finally parted and I got it written. A great deal of research went into this book to make it as realistic as possible.  Although it has been a long time coming, I could not be more pleased with the end result.

7. If people can buy or read one book this week or month, why should it be yours? Although I am obviously biased, this book will furnish the reader with everything we all look for in a good story. It is a very entertaining read that is well paced with a strong storyline that pulls the reader in early. The characters have depth and are quite real, each with flaws and strengths that all of us can relate to. Many of the readers I've heard from open with the character they liked the best.  Being the author, this is some of the highest praise I can ask for. Finally the suspense is tightly woven throughout the story, which is what makes this book hard to put down. When the reader does get to the end, they are anxious for book two.

About The Author: Every now and then author James S. Parker has a vision. And, when he does, he sees people and places off in the misty distance. Sometimes these visions are futuristic and filled with danger,. Most often they are mystical, with good and evil and a cast of characters who beautifully represent both. Though he sees through a glass darkly, he writes as though he has been granted a glimpse into the unknown, one that has informed his novels and their powerful stories of good and evil and the struggles we all face every day to assure that good wins. Infinity's Gateway, the first book in a fascinating sci-fi adventure trilogy, is his latest work. James lives in San Antonio, Texas with his wife, Margaret. For more information, please see: https://www.jamessparker.com/

I Guarantee Books will Soar Post-Pandemic

Are Literary Agents – Or Authors – Full Of Crap?

The Psychology of An Author’s Book Marketing

Is Social Media A Bust Or Boon For Authors?

How Authors Can Build Their List Of Potential Book Buyers

How Much Should Authors Spend On Book Marketing?

Posted by BookMarketingBuzzBlog at 2:23 PM