Book Shows How To Overcome Any Challenges To Succeed 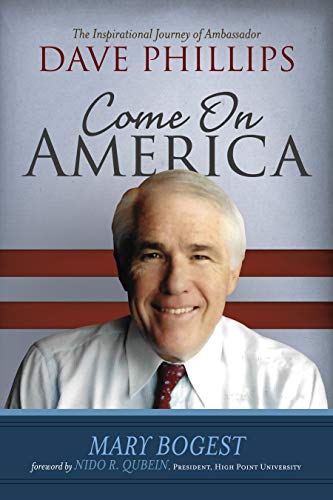 He should know about the can-do attitude that’s needed to succeed.  Early on he had to overcome some significant barriers – a leg amputation and a bout with rheumatic fever as a child, and bullying and academic challenges that got him suspended from high school for several months.  But he went on to become a successful businessman, serve as North Carolina’s Secretary of Commerce, chair the first profitable Special Olympics, and serve as the U.S. Ambassador to Estonia.

So just how did he come to be in a powerful position to meet with President Ronald Reagan, President George W. Bush, Israel Prime Minister Benjamin Netanyahu, the Dalai Lama, U.S. Senator’s Mitt Romney and Jesse Helms, and Archbishop Desmond Tutu?

“He takes risks, is very outgoing, and sees failure as a learning opportunity,” says Bogest.  “Dave has always had a positive attitude and even in the face of adversity, that attitude has gotten him through any challenges he faced.  He has always told people who are going through a hard time to look for that taste of success, something they can build upon.”

Here is an interview with author Mary Bogest, who is a client for the public relations firm that I work for:

1.      Mary, what inspired you to write about the former U.S. Ambassador to Estonia? I write a weekly newspaper column featuring events and the people of High Point, NC. Dave Phillips grew up in High Point and continues to call High Point his home. Although not a High Point native, I had heard him speak several times and was mesmerized by his interesting personality so when he invited me to come to his office I jumped at the opportunity. As I looked around I saw photos of world leaders and mementos from all over the world. These included the white khata from the Dalai Lama and John F. Kennedy’s book Profiles in Courage with a letter of thanks written by Eunice Shriver. I always wanted to write a book and then it occurred to me that a book about Dave Phillips would be perfect.

2.      What are some lessons you’ve learned from Dave Phillips’s life?  I learned to look at life’s challenges as opportunities, to never give up and to have a positive attitude. That is how Dave lived his life from the time he was a child and had to deal with his foot deformity, at first wearing a six-inch high shoe and finally a partial leg amputation that led to bullying. He also faced a life threatening rheumatic fever as a child yet he always had a positive attitude. He did become a prankster that perhaps contributed to his academic challenges. But no matter what he faced in life his attitude remained positive. He never gave up on anything in life and developed lifelong friendships from his days at Choate, as a businessman and in government.

3.      He says that our challenge, as a nation, is personal that no matter what adversity we’ve faced, we need to find the confidence to show up in our lives.  Easier said than done?
He believes that it is the duty of that it is the responsibility of every United States citizen to participate in their community, to reach out their hands to others whether they are like you or not. Dave wants America to stand and to come together as a united America. Just as he was able to serve both a Democratic and a Republican governor, Americans should stand up for the America we cherish. He feels that as Americans we often don’t realize how fortunate we are and to look back and be proud of where we came from and look forward with that same pride in hopes of where we are going.

4.      He fears Americans no longer trust their institutions – government, media, big businesses.  So how do we restore the public trust? This is a difficult question, however if people would just take time to put aside their differences and learn to work together with people who may look, act or believe differently than we do they may find out they have more similarities than not. It is easy to look at the opposition as the enemy but in truthfulness if people would just shed their armor they could work together to achieve the same goals. In America everyone has the opportunity for success provided they work hard. One cannot say that of every country. We are very fortunate to live in a democracy where anything is possible, even trust.

5.      He was not a good student in school and even got a long suspension in high school.  He also is handicapped from being born with a leg deformity.  Is he an unlikely success story?
In some ways, he is an unlikely success story. While he was born into privilege, he could easily have given up or taken it easy and done nothing but that was not the make-up of Dave Phillips. He loved meeting people and still does. Nothing, not a leg amputation, bullying, academic challenges ever prevented him from pursuing the goals that he ultimately set for himself. His academic challenges were more because of a lack of interest at that time in his studies and more of an interest in socializing. This, too became important in his life because he always reached out his hand in friendship to everyone, friend or foe.

6.      He was appointed to the Estonian ambassador position by President George W. Bush.  You tell some interesting stories about the times they met.  Can you share one?  The story most shared is not the most tellable one. It is the story told by George W.’s father when he was at the Phillips’ Valleyfields Farm home in High Point many years earlier. It was a story about the mischief of his sons and it went something like this: The Bush housekeeper was ironing and she smelled something very bad. At first she couldn’t figure it out but then she knew it was coming from the steam iron. It seems that one of the Bush boys had urinated in the steam iron and it was smelling up all the ironed clothes. All the clothes had to be rewashed. No one confessed to the prank.

7.      When asked what Dave feels is his role as ambassador he says he was a salesman for America, and Estonia was his territory.  What did he sell to Estonia?
He sold to Estonia that America is their ally and friend. That was evident during the Cyber War when Dave used his diplomacy and tact to forge a friendship with the Russian ambassador to Estonia. The message to the Estonians was that Estonia stood behind them and this friendship represented calm putting aside the fear that Russia would invade. Estonia has maintained a very positive relationship with America. He wants to set an example that America is a country grateful for our freedom, for our democracy and for capitalism.

8.      He was the chair of the Special Olympics two decades ago, putting on the first profitable competition for the then 31-year-old institution.  How did he pull that off? Several states were vying for the Special Olympics. He was given the challenge of raising $5 million in a week to obtain them. He knocked on the proverbial doors until one opened and he did not quit until he had the $5million to gain the Special Olympics. The other keys in making the Special Olympics profitable were to get a significant number of sponsors and also to get North Carolinians actively involved. It was the largest single athletic event in the history of North Carolina including all of the volunteers and the athletes. There was also the largest peacetime airlift in history with Citation plane owners donating to fly athletes from their areas to Raleigh.

9.      The governor of North Carolina, a Democrat, recruited Dave, a Republican, to serve as the state’s Secretary of Commerce.  What innovations did Dave advocate for?  Dave was a master at communication and Governor Hunt took advantage of that forte. They traveled together meeting world leaders in an effort to bring industry and jobs to North Carolina. That also included the hotly contested effort to bring Mercedes to North Carolina when Hunt’s nemesis Jesse Helms joined the ream. Dave was never concerned about political sides, whether Democrat or Republican. He cared about what was best for his city of High Point, his state of North Carolina and his country of the United States of America. He would quote Governor Hunt’s recipe for economic success and that was simply put JOBS!

10.  He had rheumatic fever for months as a child. It seems just one of many challenges that he overcame.  How does one find a way to persevere in the face of adversity?   Dave has always had a positive attitude and even in the face of adversity, that attitude has gotten him through any challenges he faced. He has always told people who are going through a hard time to look for that taste of success, something they can build upon. In his case as a child he looked for opportunities to have fun like any other child. So with adversity, look for that opportunity and as in Dave’s life, he was always curious so he kept on persevering as a child faced with difficult challenges that he overcame.

11.  You write about how one must take risks.  Why?  Without risks, there is no reward and one remains stagnant. When Dave was a young businessman he ventured into a fabric mill that neither his father nor uncle wanted to invest. Dave, feeling it was a good investment took that risk, a risk that was not supported by his father, a risk that he could ultimately fail. That risk turned out to be a success. Of course with risk there is always a chance of failure but without failure one does not learn. If people only experience success, there are no blocks to build upon. One grows from failure. Risk-taking’s essential. Failure is a possibility one must see as a learning experience.

Posted by BookMarketingBuzzBlog at 10:53 AM