Who Should Authors Slap To Sell A Book? 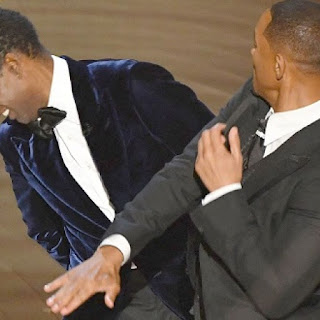 There is a war in Europe and a festering pandemic at home. Gasoline is pricier than jewelry. Crime is up nationwide. So’s inflation. But spring has arrived and summer vacations are being planned. It is not all dire. There is enough to occupy our minds with, and yet, the thing that has been most talked about for 72 hours is the Will Smith showdown with Chris Rock. Authors, take note of what gets media coverage.

Let’s look at the elements that make it a great story:

Two heavyweights, both in their prime but not at their peaks, who actually appeared in film and TV shows together, were the central characters in this theater of the absurd. Chris Rock has been a dominant comic for over 30 years; Will Smith is a comedian-turned-Box Office juggernaut.

You think cash is king? Well, video is gold for today’s social media-centric society. That slap has probably been viewed over a billion times already.

Violence but no hospitalizations

Cartoon violence: crap happens but everyone walks away without a limp, cut, or break. Sure, souls were injured, but that is on the inside. If I can’t see it, it doesn’t exist.

Hollywood awards show? It doesn’t get much bigger than the Oscars. Big stage for a big bout.

Neither Smith or Rock are known for violence or even public spats. They are clean-cut guys who rose to stardom by working hard and using their mouths and wits — not their fists.

Will performers and speakers self-censor for fear of retaliation? If things become off limits, is free speech dead? Comedy, of all forms of free speech, needs to flow unfettered. The funniest stuff is what seems taboo or perceived to be unmentionable. It is like a church confession: nothing said can be prosecuted.

Comics now have a target on their faces. Forget a drunken heckler mouthing off at a show. Will we see more people charging the stage now?

We now have a role model for what not to do. People looked up to Smith as a star but now they see a guy who lost control, who resorted to violence unnecessarily. Defending your wife’s honor is not the same as defending yourself against impending physical danger. One cannot defend honor by resorting to dishonorable means.

What we saw happen left us in shock and utter disbelief. We wondered if this was, in true Hollywood fashion, some staged bit. It was odd that Rock, with his hands behind his back, chin out, and Smith seen approaching in a rage, did nothing to defend or deflect what was coming. It was also strange that Rock wasn’t knocked down — and stranger that he didn’t look to fight back. Lastly, he did not get mad or yell out a more natural reaction like, “What the fuck, Will?” He just stood there and told jokes like someone merely adjusted his crooked tie.

But there appears little upside to staging a scene that will forever negatively define their careers. Rock, the clear victim, is seeing newly released tour dates sell out faster than they go on sale, but Smith can’t be getting too many film offers unless it is to play a boxer.

The saddest thing of all is that polls now show the public reaction to be split as to who was wrong: a comic that went too far verbally or an actor who went too far physically.

What? Are people’s values so screwed up that they can’t see who is in the wrong here? Folks, only one person committed a crime here.

What also saddens me is the weak, hypocritical, and stupid actions of the Academy of Motion Picture Arts and Sciences.

First, notice the crowd roared over the alleged insulting joke. How do you laugh at it and then justify Smith’s overreaction?

Second, can they afford security? No one rushed the stage or held Smith back. Why?

Third, how come he was allowed to stay for the rest of the show like nothing happened? Throw his ass to the streets or take him to a police station for questioning. 24-hour psyche hold — anyone?

Fourth, why is he allowed on stage again, now a crime scene, to accept an award and give a speech? Mail the Oscar and call it a night.

So, author, as you can see, this was a rare and unusual event, with many interesting elements. We didn’t even discuss his wife’s disease or the side chatter about the supposed racial factors. It is just too much to absorb.

How do you sell a book? Start with a public bitch-slap of a book critic. Apparently, our society not only won’t punish brutish behavior, it will endorse it.

What Is Your Author Origin Story?

How Do You Assemble A Book Launch Team?

What Will Help You Market Your Book?

Are There Alternative Methods To Marketing A Book?

How Do Authors Crack The Book Retail Market?

How Do Authors Get More Book Reviews?

What Should You Do To Promote Your Book?

Posted by BookMarketingBuzzBlog at 4:18 AM