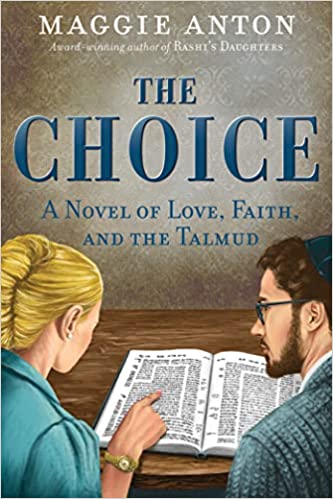 1.      What motivated you to write your book, to force you from taking an idea or experience and turning it into this book?

Fifty years ago, I was one of many readers to fall in love with Chaim Potok’s duology of novels, The Chosen and The Promise. They introduced me to the Talmud, but according to traditional Jewish Law, I, a woman, was forbidden to study its contents. Decades later, enrolled in a women’s Talmud class, I was reading Davita’s Harp, Potok’s only book with a female protagonist. And who should appear in the final chapters as Davita’s attractive grade school classmate but the hero of The Chosen? In 2013 I was finishing my sixth historical novel, Enchantress. Potok’s characters still rattled around in my head and refused to leave. So, with the idea of continuing their story, I reread the first two books. A feminist, I was shocked at what short shrift the female characters received. So I decided to write The Choice, yet another novel I wanted to read that had not been written, again focusing on overlooked Jewish women. My book would give names and backstories to the female characters inspired by Potok’s work. And in the process, comment on and criticize women’s unequal and inferior legal status in traditional Judaism.

Like my other historical novels, the basic plot is a romance where the protagonists experience many trials and triumphs during which their relationships with one another and with Judaism are tested. Ultimately, they, along with the readers, are rewarded with a happy ending. So it’s about love, New York City history, a little baseball, and of course, Talmud. Because for me, an additional frustration with Potok’s first two novels, in which Talmud study is so entwined with the plot, is that no actual Talmud appears—not one line of Gemara. It was this frustration that drove me to include genuine Talmud in my Rashi’s Daughters trilogy, so that when Rashi teaches his daughters, the reader learns along with them. Thus I created a plot for my novel in which the hero and heroine’s relationship blossoms as they study Talmud together. I think The Choice will appeal to the fans of my other novels, to readers of Chaim Potok’s early works, and to viewers of the television series, Marvelous Mrs. Maisel, Shtitsel and Unorthodox.

3. What takeaways might the reader will be left with after reading it?

Of course, I’d like my readers to come away with some enjoyment from the romance and happy ending. And I hope the Talmud scenes will encourage some to study Talmud themselves. But I also hope they will take away the knowledge of how Torah and Talmud have been interpreted unfavorably toward women—especially in regard to marriage, worship, text study, and fulfilling mitzvot. I hope they will appreciate how that has changed over time, with Jewish Law being more lenient in Rashi’s 11th century French community, then becoming stricter in the 16th century when the Shulchan Aruch was printed, followed by Reform Judaism abandoning traditional halacha in the 18th century, after which Orthodoxy arose in response and required modern Jews to uphold 16th century halacha. I hope readers will understand how and why my protagonists ultimately move towards Conservative Judaism as a middle ground, as Potok did.

I wanted a title that would evoke Potok’s early novels, and since book titles aren’t copyrighted, I thought The Choice was close enough to The Chosen to do that. In addition, the plot revolves around the choices characters make and how that influences their lives. As for cover design, I looked at over twenty other recent historical novels with female protagonists that take place in the ten years after WW2 ended. Near all showed a back-view of a woman wearing clothing and hairstyle from that time. I’d originally imagined a simple cover showing a finger with pink-enameled nail on a page of Talmud, which came from an actual scene. But everyone whose opinion I sought said a novel with “love” in the title needed to show the couple together, even if only with a partial view of their faces. Keep the pink fingernailed hand and Talmud, they advised, but with the couple studying side by side.

5. What advice or words of wisdom do you have for fellow writers?

Write the book that you want to read that hasn’t been written yet. Choose a topic that you want to know more about so the research will be enjoyable even if you don’t get the book written. Read books or take classes about basic writing techniques: show don’t tell, different plots, character development, points of view, dialogue. I recommend Self-Editing for Fiction Writers by Renni Brown and David King. It’s also a good idea to learn a little about the publishing business; it can’t hurt.

6.      What trends in the book world do you see -- and where do you think the book publishing industry is heading?

More people are reading e-books, especially with fiction. So, publishers, particularly indie publishers, must keep up with the latest ways to sell e-books and not depend so much on Amazon’s Kindle. Also, the big publishers are focusing even more on blockbusters, leaving midlist authors to either self-publish or go with an indie publisher.

7. What challenges did you overcome to write this book?

My biggest challenge was that The Choice is NOT authorized by the Potok family, so I had to be careful not to violate copyright laws. The Choice is what intellectual property lawyers call a “transformative” work, one that uses some elements of another copyrighted work for purposes of criticism and/or commentary under the Fair Use Doctrine. Just as The Wind Done Gone was ruled to be a fair use of Gone with the Wind for retelling Margaret Mitchell’s tale using the slaves’ point of view to criticize the 1860s South, in my case The Choice exposes the unequal and inferior position of women in traditional Jewish Law, a subject not addressed in the work of Chaim Potok. Unlike The Wind Done Gone, however, I have only alluded to the world that Potok evoked in his work rather than retell his stories. Setting my novel years after his novels concluded, giving his characters new names and creating many new characters, I was being respectful to his writing and true to life in New York’s Jewish world in the early and mid-1900s

8. How would you describe your writing style?

For me, doing research is the fun part. Writing is hard work. I like to keep my writing style casual, like I’m telling the story to a friend. There are so many writing “rules” like only one POV per scene and show-don’t tell, that I take as suggestions. My first novel, Rashi’s Daughters: Joheved, was riddled with these and other neophyte errors, yet it’s still my best-selling book. I know I’ll never win the Noble Prize for Literature, but if my readers buy sufficient copies, then write me fan letters and give me good reviews online, I’m satisfied.

9. If people can buy or read one book this week or month, why should it be yours?

After reading The Choice, a person will not only have enjoyed a satisfying historical romance with a happy ending, but also have learned all sorts of information about women’s changing roles in traditional and modern Judaism that they would not otherwise find in a novel.

How Do Authors Solve Their Problems?

Posted by BookMarketingBuzzBlog at 7:38 PM