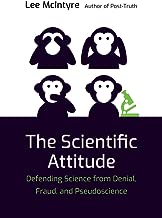 I've been a scholar in the philosophy of science for 20 years, but my goal in writing philosophy is to convey my ideas clearly to a general audience. For years I've been thinking about what is distinctive about science, but I finally had to admit that the philosophers' approach of logic and method just wasn't working. We didn't have a good answer for why science was special and that meant that we couldn't defend science as well as we should. Science deniers exploited this to manufacture doubt about things like climate change or vaccines, where there really is no scientific controversy. This got me thinking about what was REALLY distinctive about science, which I think is the attitude that scientists take toward evidence: they are open to new ideas, but skeptical of those ideas until they have been tested. In a nutshall, scientists care about evidence and they are willing to change their mind based on new evidence. This insight allowed me to figure out a way to push back against science deniers, and once I had that I just had to share it!

2. What is it about and whom do you believe is your targeted reader?
My book is about all of the ways that scientists embrace the rigor of testing scientific theories, and how often scientific theories fail. But that is not a bad thing because it can lead to great scientific progress. Uncertainty is not to be feared, but is rather a part of how scientists come to understand the natural world. Gathering evidence that increases the warrant for your theory is an awesome thing. What is really great about scientists is that they have an ethos that is embedded in a set of practices that allow them to keep one another honest. A good scientist is always answerable to the evidence. My targeted reader would be those who care about science. This includes not just scientists and philosophers, but really anyone who is concerned about the recent assault on science.

3. What do you hope will be the everlasting thoughts for readers who finish your book? What should remain with them long after putting it down?
That science is one of the greatest inventions of the human mind. It is a wonderful way of making sure that we aren't just fooling ourselves into believing something just because we want to. We have to be humble and curious before nature. We can achieve great things if we allow ourselves to follow the evidence and not just assume that we already know the right answer.

4. What advice or words of wisdom do you have for fellow writers?
Always keep your reader in mind. When I am writing about complex ideas I constantly ask myself "what would a reader know at this point and what questions might they have?" By putting myself in the reader's shoes I can anticipate what they need to know next. This means that even when I am discussing something difficult, I can take the reader right along with me.

5. What trends in the book world do you see and where do you think the book publishing industry is heading?
I think there will always be a market for books, but the big New York publishers are increasingly afraid of anything that isn't a guaranteed bestseller. That is unfortunate and it is why I think there is a great and continuing role for small presses and university presses. My own publisher, MIT Press, is a model of academic rigor, innovation, and appeal to a trade audience. I wish that more publishers would adopt that model, and I think that the business side of things would follow.

6. What great challenges did you have in writing your book?
Making it rigorous enough for the philosophers, but comprehensible enough for the lay reader. That was my constant challenge. It took me three years, and about 10 from-the-ground-up redrafts, to get there.

7. If people can only buy one book this month, why should it be yours?
My book is the first comprehensive defense of science along the lines of its values and practices that has appeared in several decades. It provides a roadmap for defending science from climate change deniers, vaccine deniers, etc. If you've ever wondered what to say to someone who says "that's just a theory" or "I'll wait for more data" this is your book.

8. How do we bridge the science literacy gap?
In elementary school, they should teach not just the findings of science, but how scientists think about their work. Failure, experiment, uncertainty, wonder.....those are the keys to the scientific attitude.

Interview With: Lee McIntyre is a Research Fellow at the Center for Philosophy and History of Science at Boston University, and an Instructor in Ethics at Harvard Extension School. He has a Ph.D. in Philosophy from the University of Michigan (Ann Arbor) and has taught philosophy at Colgate, Tufts, Simmons, and Boston University. A black belt martial artist, he lives with two German Shepherds and the rest of his family just outside Boston. For more info, see: www.leemcintyrebooks.com

“Magazine seems to be a frivolous thing: a way to pass the time in a waiting room or on a commute, a way to take a break from the work of real thinking. But behind each pulp-and-ink issue lies gargantuan effort to satisfy the curiosities of an anxious society. Each article represents a claim on the reader’s attention, as well as a period of obsession, or at least dutiful fixation, for the writer behind it. In the years before radio, television, and the internet, this meant readers from all walks of life--from the president to the newly literate--turned to the written word to tell them what exactly they were living through, and what might come next.”

“Out of all the loud--shouting newspapers and venerable magazines of the day, Mc Clure’s unprecedented in its determination to entertain, to chase the allure of the new, and to expose injustice. Mc Clure’s  stories agitated for change, though they also sought subscribers the way television producers now chase ratings. They exposed the dysfunction of mob-run cities like   St. Louis and Pittsburgh and destabilized the monopoly on industry held by oligarchical tycoons, particularly John D. Rockefeller. S.S Mc Clure’s conviction that a magazine could be a cultural force kept Mc Clure’s sharply attuned to the demands of the reading public. The magazine embodied the muckraking genre; this term for investigative journalism was arguably invented for Mc Clure’s. By 1900, Mc Clure was widely recognized as one of the most important men in America. In a latter reflection in Life, the writer noted, “nobody’s hand has been more perceptible than his on the crank that turns the world upsidedown.” At its peak, McClure’s  had more than 400,000 subscribers, soundly beating, its rivals Harper’s Monthly, Scribner’s Magazine, The Century and The Atlantic.”

“The bitterness between politicians and the press weighs on us now, too, more than a century after the “muckrake” speech and mutiny at Mc Clure’s. Now, at a time when powerful voices question the value and validity of a free press every day, the story of Mc Clure’s illuminates both what can happen when investigate journalism is able to thrive and the consequences that come when it is deliberately torpedoed. It also shows the pitfalls of a media world whose major currency is outrage, a dynamic that can jeopardize the integrity of investigative work and seems certain to set readers on a path to apathy.”

How Do Authors Promote Books When The Media Is Corona Centric?
https://bookmarketingbuzzblog.blogspot.com/2020/03/how-do-authors-promote-books-when-media.html

Advice to Authors From A Book Promoter of 30 Years

How Are Authors Selling Books Through A Pandemic?

What Types of Books Can Get Media Coverage Now?

What Should You Do to Market Your Book?

Brian Feinblum’s insightful views, provocative opinions, and interesting ideas expressed in this terrific blog are his alone and not that of his employer or anyone else. You can – and should -- follow him on Twitter @theprexpert and email him at brianfeinblum@gmail.com. He feels much more important when discussed in the third-person. This is copyrighted by BookMarketingBuzzBlog ©2020. Born and raised in Brooklyn, he now resides in Westchester. His writings are often featured in The Writer and IBPA’s Independent.  This was named one of the best book marketing blogs by Book Baby http://blog.bookbaby.com/2013/09/the-best-book-marketing-blogs and recognized by Feedspot in 2018 as one of the top book marketing blogs. Also named by WinningWriters.com as a "best resource.” He recently hosted a panel on book publicity for Book Expo America.


Posted by BookMarketingBuzzBlog at 11:49 PM